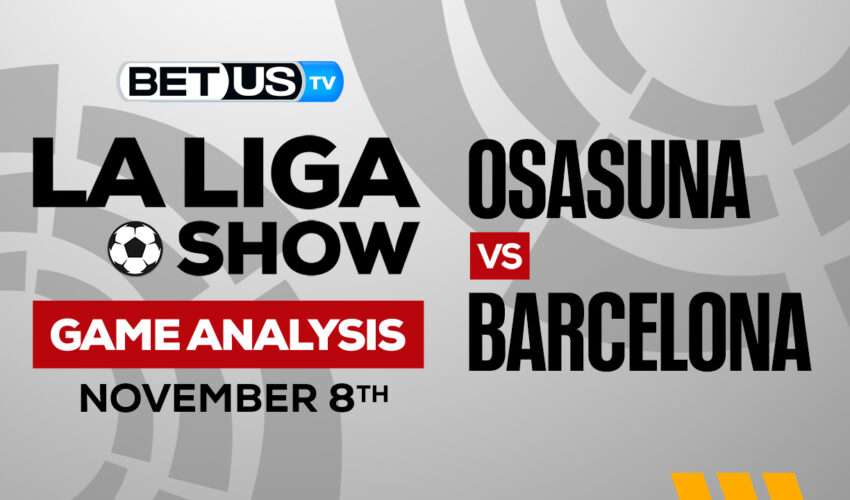 A very interesting and exciting game is what we are going to have this Tuesday, November 8 between the two teams located in the first places of the La Liga classification between Osasuna who will be hosting FC Barcelona.

There is no doubt that the home team, Osasuna, has been one of the surprises this season. The team led by Jagoba Arrasate has been doing things in a great way. They come from a string of two consecutive victories against Celta de Vigo (1-2) and against Valladolid (2-0). The team has seen constant growth, players like Ezequiel Avila have been having a great time and helping his team stay in the fight for the top positions. Osasuna is currently in fifth place in the standings with a total of 23 points, and is in UEFA Europa League positions for the following season. But also very close to third place, since the difference in points between third and fifth place is only 1 point.

However, they will be running into FC Barcelona, who does not want to leave the top positions and continue hand in hand with Real Madrid in first place. The “Culés” have a total of 34 points and are very close to Real Madrid. After a tough elimination in the UEFA Champions League, Barcelona does not want surprises and rather wants to wash its face and continue fighting for the leadership and to win the La Liga title this season.

Without a doubt, it will be one of the most striking matches this day in which FC Barcelona arrives as the favorite to take the victory for what has been done during the season, in addition to the fact that in the last 5 games FC Barcelona has achieved 3 victories against only 1 of the Osasuna, who want to make their home respected and give joy to their fans and continue fighting for European positions

The implied probability for these two teams attached to the betting lines has Osasuna at a 15.38% chance of winning the game, meanwhile Barcelona has 66.67% probability of finishing the game with the W.