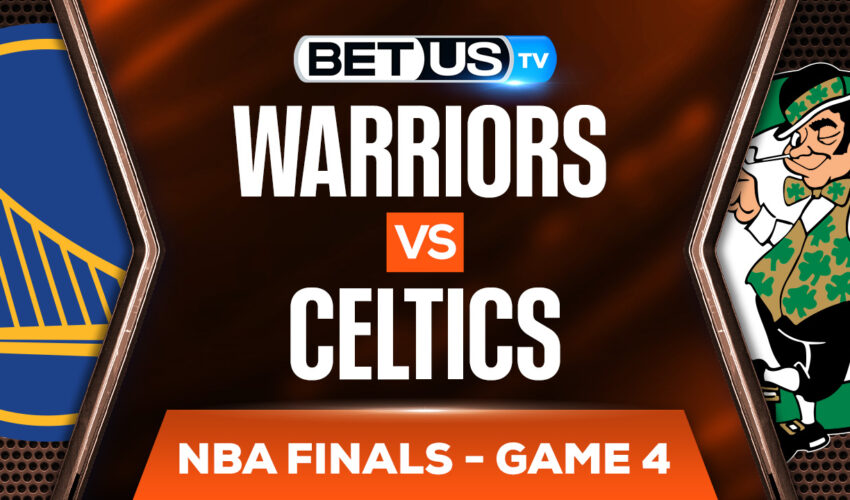 Let’s check the latest NBA picks, news, stats and NBA picks today for Warriors vs Celtics. We’ve plenty of NBA picks and parlays for you to consider.

The Golden State Warriors know a thing or two about wasting a 3-1 lead in the NBA Finals. Well, this time it’s the Boston Celtics who could take such an advantage. Game 4 is scheduled for Friday night at TD Garden, where the Celtics took Game 3 by 16 points (116-100).

Jaylen Brown led the way with 27 points. He was followed by Jason Tatum with 26 and Marcus Smart with 24. Defensively, Robert Williams III played a heck of a game, finishing with 1o rebounds, four blocks and three steals.

As for the Warriors, Stephen Curry and Klay Thompson combined for 56 points but clearly, it wasn’t enough. Draymond Green had a lot to do with that. He finished with only two points, three assists and four rebounds. On top of that, he fouled out.

Besides losing, the Warriors went to the hotel pretty concerned about Curry’s left foot. Without Steph, they wouldn’t stand a chance.

“Well, we need him if we want to win this thing. I know Steph is going to do everything he can in his power to play. I am really hoping he’s OK because he’s our identity, and without him, it will be very difficult,” Klay Thompson said.

The good news is that Curry himself confirmed he’ll play. That’s why the Celtics come in as the NBA betting favorites by only four points. The bad news, for Curry and company, is that they’re 1-1-4 against the spread in their last six games in Boston.

Besides Curry, Andre Iguodala, Otto Porter Jr., Gary Payton II and James Wiseman are also on the injury list. Nevertheless, only Wiseman is expected to miss Game 4. On the other hand, the Celtics have no major injury concerns.

The total for Game 4 is set at 214½ points. Considering what’s on the line, there should be fireworks. Plus, the total went over in four of Golden State’s last five games.

The implied probability for these two teams attached to the betting lines have Celtics at a 62.26% chance of winning the game, meanwhile Warriors have 40.82% probability of finishing the game with the W.

Take a Look at Other 2 Analysis, Picks & Predictions For The NBA Finals