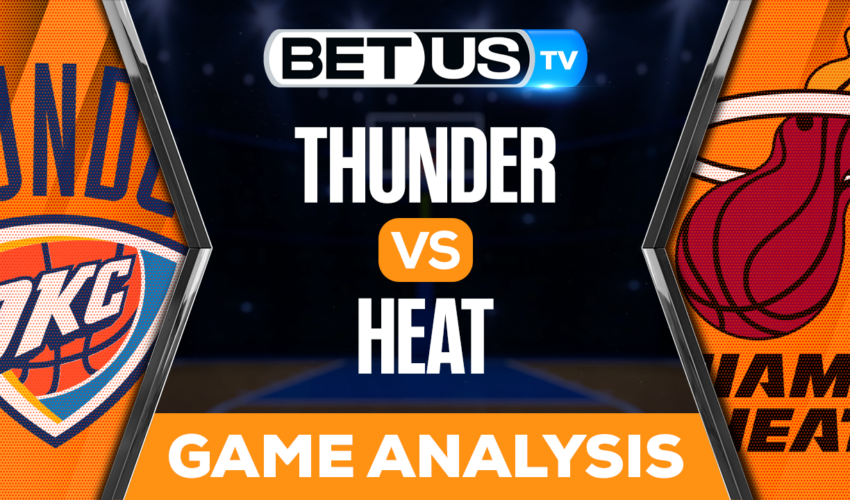 On Tuesday night, teams from different conferences will face each other when the Miami Heat take on the Oklahoma City Thunder. The Heat have a 21-20 overall record and an 11-9 mark in home games. Meanwhile, the Thunder have won three of their last four games and sit at 18-22 on the season.

Oklahoma City has been on a roll as of late, but if they want to win tonight, they’ll need to show up with a good offensive performance. While the Thunder are one of the league’s best offensive teams, they only managed 108 points in their previous meeting with the Heat. As the eighth highest scoring team in the league, Oklahoma City averages 116.5 points per game.

The Thunder will need solid performances from Josh Giddey and Lou Dort, while also hoping for Shai Gilgeous-Alexander to show up big time. Giddey’s versatility makes him a potential matchup problem for the Heat tonight. The 20-year-old has been on a tear as of late, posting impressive numbers of 18.2 PPG, 6.0 RPG, and 5.0 APG over his last five games.

Even though Miami won their last matchup against the Thunder by two points on the road, they are only 2.5-point favorites tonight. This is probably because the big man Bam Adebayo has been ruled out. Star player Jimmy Butler sat out last game against OKC, but will suit up tonight. Now that Butler is healthy again and Bam is sidelined, the Heat will have to rely on their defense if they want to win without their star player.

While Miami is last in the league in scoring (108.7 PPG), they will be facing the 23rd-ranked defense in Oklahoma City (116.7 Opp. PPG). For a Heat team in desperate need of scoring, Jimmy Butler’s return is huge. Butler leads the team with 21.6 PPG and will likely have favorable matchups all night long against a Thunder team that struggles to defend opposing wings.

Let’s check the latest NBA picks, news, stats and NBA expert picks for Thunder vs Heat. We’ve plenty of NBA predictions for you to consider.

The implied probability for these two teams attached to the betting lines have Heat at a 56.52% chance of winning the game, meanwhile Thunder have 47.62% probability of finishing the game with the W.