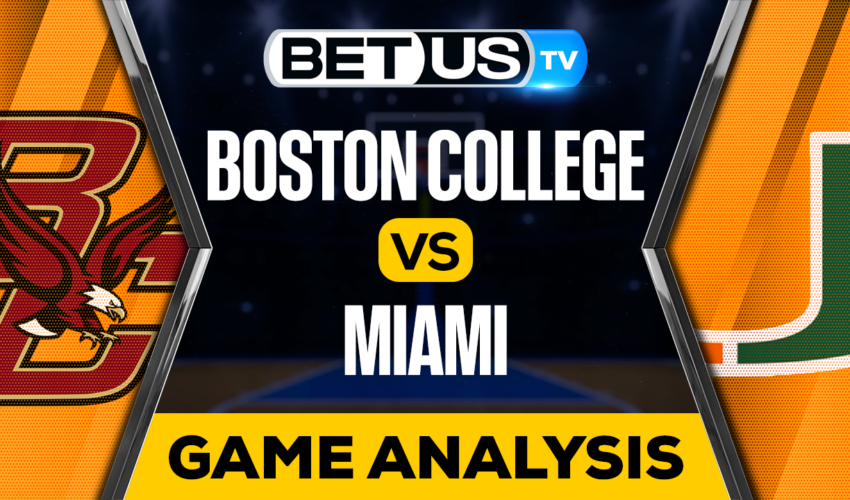 Someone wake up the Eagles!

This Wednesday, January 11, we will have a game that looks like one of the most uneven games of the day, when the Boston College Eagles face off against the Miami Hurricanes.

The Boston College Eagles have not had the season they expected. Despite having been growing in their performance in their last 5 games, this has not been able to put them in the ACC fight. In their last 10 games they have barely been able to get 4 victories, for a performance of just 40%. They come from losing their last game against the DUKE Blue Devils by a score of 64-64. Perhaps one of his shortcomings has been receiving more points than they score, since the Eagles have a scoring average of 64.7, while he has received an average of 67.3 points per game, or that has been reflected in the results. Despite having the likes of Makai Ashton Langford, TJ Bickerstaff and Jaeden Zackery, the team hasn’t quite managed to come away with victory in its most decisive games. They are currently in the eleventh position of the Atlantic Coast Conference with an 8-8 record and a negative 2-3 conference record.

The Miami Hurricanes team lives a very different reality. The Hurricanes, despite coming from losing their last game played against the Georgia Tech Yellow Jackets by a score of 76-70, come from an excellent performance of 90% in their last 10 games. The great performance of its stars, such as Isaiah Wong and Norchad Omier, have made it so that the Miami team has only lost 2 games this season, averaging a total of 77.3 points per game, being one of the highest scoring averages. and just receiving an average of 68.3 points per game. The Miami Hurricanes are ranked second in the Atlantic Coast Conference with a positive conference record of 4-1 and an overall record of 13-2.

There is no doubt that the big favorites to win this game are the Miami Hurricanes and that is what the bids show. The Hurricanes come into this game with a 93.2% chance to win the game, while the Boston College Eagles barely come in with a 6.8% chance.

Let’s check the latest NCAAB picks, news, stats and NCAAB expert picks for Boston vs Miami. We’ve plenty of NCAAB predictions for you to consider.

The implied probability for these two teams attached to the betting lines has Boston at a 19.05% chance of winning the game, meanwhile Miami has 85.07% probability of finishing the game with the W.