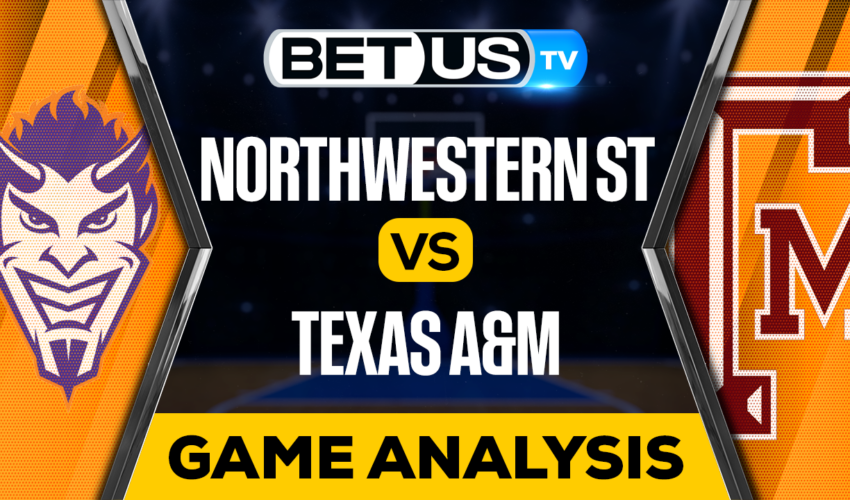 The Texas A&M Aggies are looking to get back to winning ways before conference play when they clash against the Northwestern State Demons on Tuesday night. Texas A&M has lost three out of its last four games, including back-to-back setbacks against Memphis and Wofford. Meanwhile, Northwestern State looks to snap a two-game losing streak of its own after losses to Rice and then-No. 12 Baylor.

Northwestern State fell to 8-4 after losing to Baylor in Waco. The Demons suffered their second straight loss at the Lone Star after being held to a season-low 48 points. However, NWST hung tough and only lost to the Bears 58-48, covering the generous 28-point spread. Northwestern State is scoring 72.3 points per game, while allowing 74.3 ppg, and shooting 40.3% from the field.

New head coach Corey Gipson brought in some of his guys from Missouri State and they have helped change the culture in Natchitoches. Demarcus Sharp and Jamonta’ Black have been carrying early on for the Demons. Demarcus Sharp scored over 30 in back-to-back wins over SFA and Southern Miss, and leads NSU in scoring with 16.3 PPG and 3.8 assists per game.

Texas A&M is now holding a 6-5 season record after dropping its game to Wofford in College Station. This home loss reeks of their soccer season, with the Aggies disappointing against an inferior Wofford team, and trailing by five after holding a halftime lead. Texas A&M is scoring 75.8 PPG, while shooting 44.3% from the floor.

The Aggies are trying to figure things out early after a big influx of transfers from the transfer portal. It has been a balanced effort early on, with five Aggies averaging around 8.0 ppg. Wade Taylor IV scored 21 points in the win over DePaul, and leads A&M in scoring at 15.3 ppg. Tyrece Raford matched his energy, scoring 31 points against the Blue Demons to raise his season average to 10.8 ppg.

The implied probability for these two teams attached to the betting lines has Northwestern St at a 9.80% chance of winning the game, meanwhile Texas A&M has 94.74% probability of finishing the game with the W.