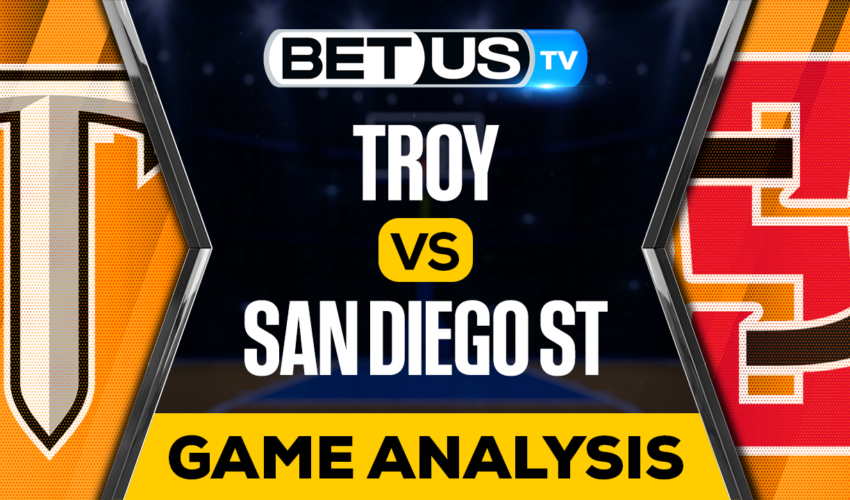 he Troy Trojans will face off against the San Diego State Aztecs in a non-conference clash that’s happening on Monday evening. The Trojans lost a road match to SIU Edwardsville on Saturday. Meanwhile, the Aztecs recorded a home victory against Occidental in their previous outing.

he Troy Trojans are hitting the road for the third consecutive match. They managed to cover in a 74-61 defeat against a ranked Arkansas team on Monday and they were considered the favorites in a 78-72 road loss against SIU Edwardsville on Saturday.

roy has looked good mostly due to an easy schedule, playing a non-DI opponent three times. However, the Trojans picked up a stunning road victory against Florida State last month. They have managed to cover the spread in two out of their last three outings.

Duke Miles has missed the last two games for Troy due to an undisclosed reason and is listed as questionable. The sophomore guard is definitely an important piece for the program, logging 14 PPG on 48% shooting. Meanwhile, Nelson Phillips is producing, scoring 20 points in two out of his last three games.

On the other hand, the San Diego State Aztecs are looking to strike a third straight win. The Aztecs were 4-0 to kick off the season then lost two back to back. Each defeat was against a ranked foe, losing to Arizona while almost beating Arkansas in a narrow OT loss.

hey have managed to counter that slide by taking down UC Irvine 72-69 on Wednesday followed by a stomping 95-57 win against non-DI foe Occidental on Friday. Unfortunately for them, the Aztecs have covered the spread in just one out of their last four games.

Darrion Trammell has been in a slump for the Aztecs, putting up a field shot efficiency below 40% in five straight games. The senior guard has scored 20 points twice this season and is scoring 13.1 PPG on 38% shooting. Trammell didn’t play Friday and is listed as questionable with a hamstring injury.

The implied probability for these two teams attached to the betting lines has San Diego St at a 94.55% chance of winning the game, meanwhile Troy has 9.57% probability of finishing the game with the W.