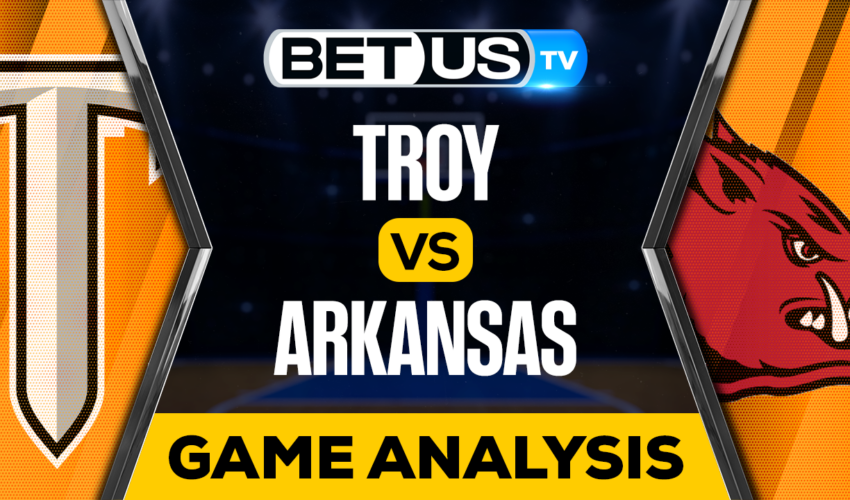 The 2022-23 NCAAB season continues on Monday when the Troy Trojans face off the Arkansas Razorbacks at Bud Walton Arena in Fayetteville, Arkansas. Troy just rebounded nicely after losing their first game of the season, winning their last couple of games, including a 118-61 victory over Southern-New Orleans.

Meanwhile, Arkansas lost their first game of the season when they got taken down by No. 10 Creighton on Tuesday, but managed to defeat No. 17 San Diego State in overtime on Wednesday with a 78-74 score. These two teams have played twice against each other, with Arkansas winning both games, including an 88-63 win in December 2017.

The Trojans held Southern-New Orleans to just 39.7% shooting, dominating the game from start to finish in a 118-61 victory. While holding back Southern-New Orleans, the Trojans shot 63.0%, including 16-31 from the three-point range. This keeps showing a solid performance from beyond the arc, putting them 102nd in the nation in three-point shooting at 36.2% and are 16th in points per game with 86.

Nelson Phillips had 22 points, 8 rebounds, and 8 assists, almost completing the quadruple-double. He also hit 8 of 13 shots in the win. Christyon Eugene added 21 points of his own, while Duke Miles chipped in 22 points. This is definitely an outstanding shooting team, though they struggled from the free-throw line, going only 10-24 against Southern, and hitting 67.3% for the season.

On the other hand, against San Diego State, the Arkansas Razorbacks hit only 3 out of 17 three-point attempts and used 27 free throws to pick up the 78-74 win. Arkansas did trail for much of this match, even falling behind by 13 to the Aztecs, though they managed to rally late to force overtime before winning it. In fact, the four-point margin of win was the biggest lead the team had all game long.

Let’s check the latest NCAAB picks, news, stats and NCAAB expert picks for Troy vs Arkansas. We’ve plenty of NCAAB predictions for you to consider.

The implied probability for these two teams attached to the betting lines has Troy at a 9.17% chance of winning the game, meanwhile Arkansas has 95.16% probability of finishing the game with the W.