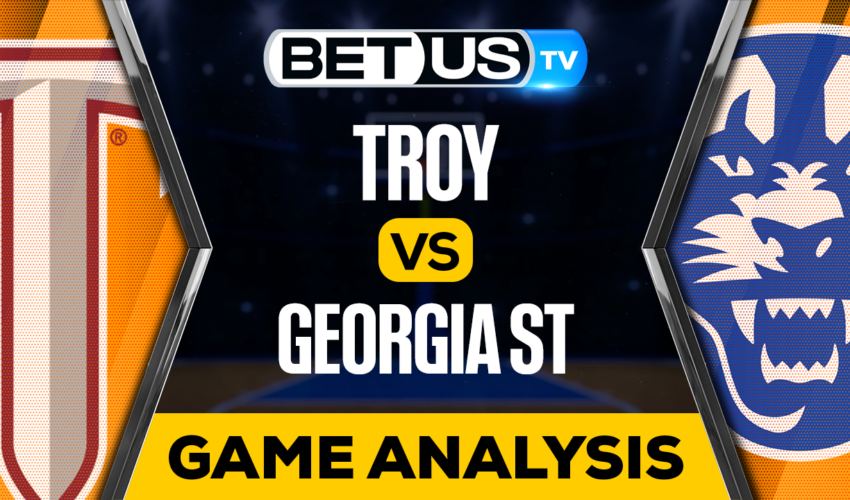 Thursday night’s Sun Belt Conference game between the Troy Trojans and Georgia State Panthers will take place at the GSU Convocation Center. The Trojans, who are now 11-6 on the year, are on a three-game winning run following their 66-54 victory over the Arkansas State Red Wolves on Saturday at home.

The Trojans, who have been doing well, outscored Arkansas State 35–27 in the second half thanks to their outstanding performance. They had respectable field goal percentages, going 21 of 52 (40.4 percent) overall, 7 of 24 (29.2 percent) from three, and 22 attempts at the free throw line.

Zay Williams, a senior forward, served as the team’s captain and ended with 16 points, three rebounds, one steal, and two turnovers in 25 minutes. They played excellent defense here, allowing just 32.8 percent from the field and 26.7 percent from beyond the arc. Troy performed admirably, forcing 14 turnovers and ending the game with four steals and blocks.

Looking at the Panthers on the opposite side of the floor, they are currently 8-8 and on a two-game losing streak following their road defeat to the Louisiana Ragin Cajuns on Saturday by a score of 78-70. These teams will only compete against one another once more during the regular season.

It doesn’t help that the Georgia State Panthers let up 44 points in the second half during a difficult 78-70 road defeat to the Louisiana Ragin Cajuns. That said, they performed admirably in terms of ball handling, shooting 45.1 percent overall, 30 percent from outside the arc, and 26 free throws.

The Panthers were led by sophomore guard Dwon Odom, who ended with 18 points, four rebounds, one assist, and two steals in 38 minutes. They need to play better defense because they let up the Ragin Cajuns’ 46.3 percent field goal, 40 percent three-point, and 30 free-throw attempts. Over the course of the game, the Panthers were able to accumulate five thefts and blocks.

Let’s check the latest NCAAB picks, news, stats and NCAAB expert picks for Troy vs Georgia State. We’ve plenty of NCAAB predictions for you to consider.

The implied probability for these two teams attached to the betting lines has Troy at a 58.33% chance of winning the game, meanwhile Georgia State has 45.45% probability of finishing the game with the W.