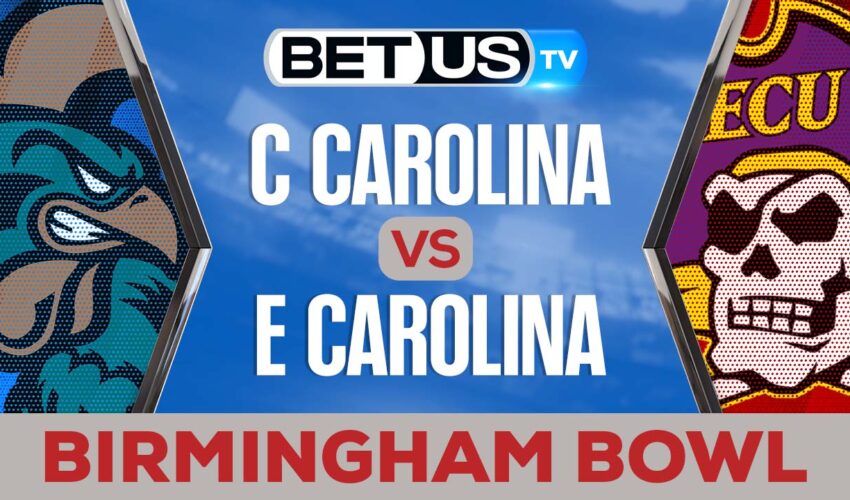 East Carolina and Coastal Carolina will look up to each other on Tuesday, December 27th, 6:45 p.m Eastern Time hosted at the Protective Stadium in Birmingham, Alabama.

Grayson McCall is the main storyline for Coastal Carolina. With the program currently in a possible rework and McCall, the current Sun Belt player of the year still looking to recover from an injury, Coastal is definitely seen as an underdog versus one of the best teams in the American division. Any possibility the Chanticleers have of pushing an upset this time around depends on McCall. They split the 2 games he missed back in November, including a 47-7 demolition at James Madison. He played not to his usual standards in a tough loss to Troy in the Sun Belt championship game. However the biggest story is that McCall announced on December 12th that he has officially entered the transfer portal, after being part of Coastal Carolina for 3 consecutive seasons.

Searching for their 8th consecutive win for the first time since 2014, East Carolina is looking to get more productivity from a defense that has conceded a total of 3,584 passing yards, as that currently ranks them 1st in the American division. However the Pirates have been incredibly proficient against the run and are able to turn the Chanticleers offense into a one dimensional pass heavy squad.

DB Malik Fleming from East Carolina is certainly a player to watch. The Pirates pass defense looked shaky at times however Fleming has been a staple from their side, a 2nd team All-American Athletic choice after picking off 3 passes and achieving a total of 41 tackles.

With superstar QB Grayson McCall hopefully playing at his peak, Coastal Carolina definitely has a chance to pull off a miracle. Without McCall, East Carolina simply has way better overall talent. As such we believe East Carolina to be a safe pick to take the win.

The implied probability for these two teams attached to the betting lines have Coastal Carolina at a 28.57% chance of winning the game, meanwhile East Carolina have 75.00% probability of finishing the game with the W.