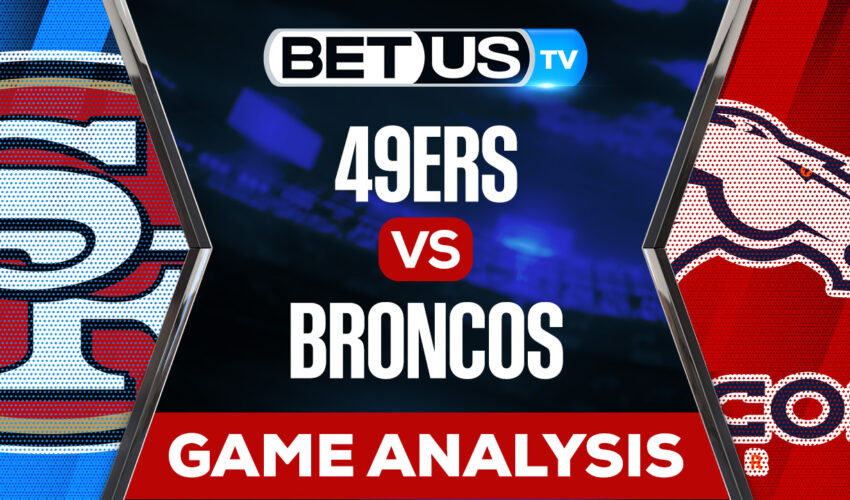 The San Francisco 49ers and the Denver Broncos meet in a week 3 NFL matchup from Empower Field at Mile High on this week’s edition of Sunday Night Football. The Denver Broncos will look to build on their 16-9 win over the Houston Texans in their last game. Meanwhile, San Francisco will try to do the same after convincingly defeating the Seattle Seahawks last time out.

For the 49ers, Jimmy Garoppolo has thrown for 154 yards and a touchdown on 61.9% passing while Jeff Wilson Jr. and Deebo Samuel each have 100+ rushing yards this season. Brandon Aiyuk also has 103 receiving yards to lead the 49ers’ receiving corps this season.

On defense, Talanoa Hufanga has a team-high 17 total tackles including 14 solo tackles while Nick Bosa has a team-high 3 sacks and the 49ers as a team have 3 interceptions this season. The 49ers showed that they can be a legit team when they’re not playing in a monsoon and while it happened under unfortunate circumstances, Jimmy G finally gets to bet on himself here.

Broncos’ Russell Wilson has thrown for 559 yards, 2 touchdowns and an interception on 58.9% passing while Melvin Gordon III and Javonte Williams have combined for 223 rushing yards so far. Courtland Sutton leads Denver’s receiving group with 11 grabs for 194 receiving yards while Jerry Jeudy has 113 receiving yards this season.

On defense, Alex Singleton has a team-high 14 total tackles while Bradley Chubb and Dre’Mont Jones each have a pair of sacks so far this season. I get the case to be made for the Broncos here, as they obviously have a solid team led by Russell Wilson, but we’ve yet to see them gel as a unit and until it happens, it’s going to be hard to see them picking up convincing victories.

Let’s check the latest NFL picks, news, stats and NFL expert picks for 49ers vs Broncos. We’ve plenty of NFL predictions for you to consider.