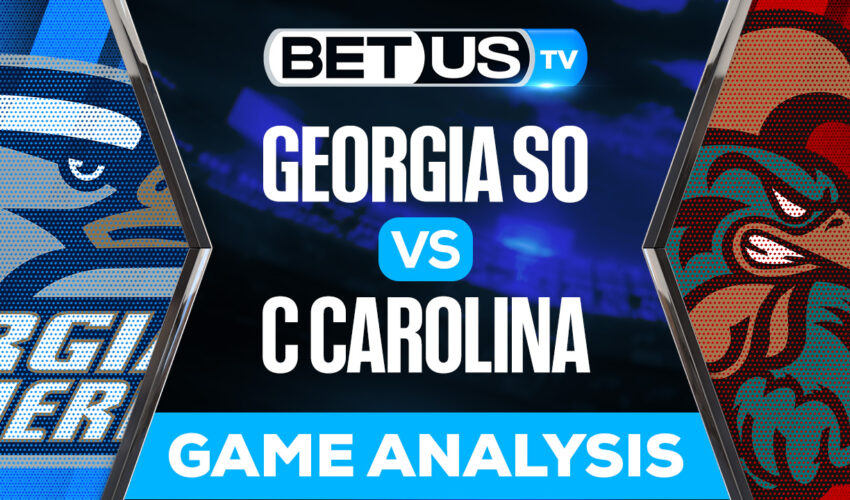 The Georgia Southern Eagles and the Coastal Carolina Chanticleers meet in week 5 Sun Belt conference college football action from Brooks Stadium on Saturday. The Georgia Southern Eagles will look to build on their 34-23 win over Ball State last time out to climb to 3-1 on the year. The Coastal Carolina Chanticleers will look to stay unbeaten after climbing to 4-0 on the year with a 41-24 win over Georgia State in their last game.

The Coastal Carolina Chanticleers will look to stay unbeaten after climbing to 4-0 on the year with a 41-24 win over Georgia State last time out. Grayson McCall has thrown for 1,001 yards, 11 touchdowns and an interception with a 70.4% completion percentage while CJ Beasley has a team-high 345 rushing yards while Reese White has 245 rushing yards as well this season.

Sam Pinckney leads the Chanticleers in receiving with 22 catches for 336 receiving yards while Jared Brown has 253 receiving yards on the year. On defense, Charles Arnold Jr. and Lance Boykin had a pair of interceptions. As a unit, Coastal Carolina has 12 sacks and 7 interceptions this season.

I get the case to be made for Coastal Carolina here as they’re usually rock solid at home and have been consistent offensively all year long. That being said, the Eagles have been consistent themselves offensively and are more than capable of hanging with Coastal offensively here with their new regime and VanTrease under center. I would not be surprised if Georgia Southern pulled off another outright win here.

The implied probability for these two teams attached to the betting lines have Georgia Southern at a 25.64% chance of winning the game, meanwhile Coastal Carolina have 77.78% probability of finishing the game with the W.