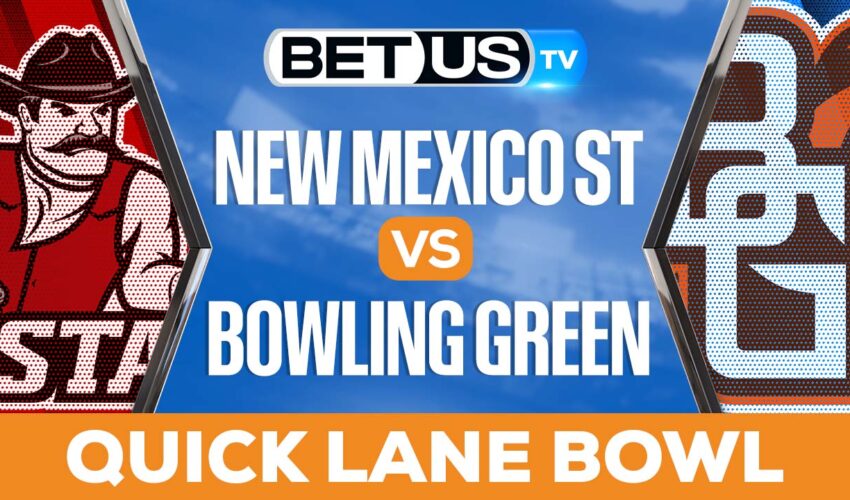 The university bowl arrives in the city of Detroit where the Quick Lane Bowl will be played between the teams of New Mexico State Aggies and the Bowling Green Falcons. Both teams come into this game with very similar numbers, which makes us expect a great game that will consecrate the Quick Lane Bowl champion.

The New Mexico State Aggies team were the ones who finished the regular season in the best way, since they have just won their last two games played, one of them against the Valparaiso Beacons by a score of 65-3 and another against the Liberty Flames by a score of 49-14. With great caliber players like Diego Pavia who is the team’s leading passer, Star Thomas, rushing yards leader and Justin Powers, receiving leader, who have led the team on the road to victory. These players are the ones who have commanded the offensive line, which averages a total of 25.6 points per game, this being one of its highest points this season. The New Mexico State Aggies sit fifth in the FBS Independents Conference with a 6-6 record.

Meanwhile, their rival, the Bowling Green Falcons arrive in a very similar situation. However, the falcons team came from losing their last game against the Ohio Bobcats by a score of 38-14. In their last 5 games they have been victorious in 3 of them for a performance of 60%. One of the most worrying points for the Falcons team has been its defensive line, since throughout the season it has allowed a large number of points, averaging a total of 33.3 points per game, which is a very important point. to take into account for this game, since the offensive line of the rival team is very strong. The Bowling Green Falcons rank third in the Mid-America – East Conference with a 6-6 record.

It is clear that both teams arrive with very similar numbers, however, according to the data provided by ESPN Analytics, it is the Bowling Green Falcons team that arrives with the most chances of winning the game with 51.9%, while the team of the New Mexico State Aggies comes in with 48.9%. We will see which of the two teams manages to impose conditions to leave the Quick Lane Bowl to be played this coming December 26.

The implied probability for these two teams attached to the betting lines have New Mexico State at a 40.82% chance of winning the game, meanwhile Bowling Green have 62.26% probability of finishing the game with the W.