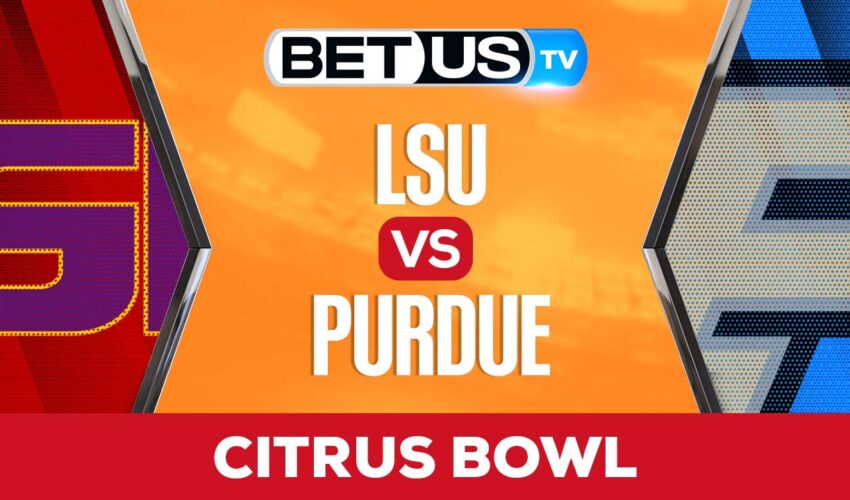 LSU and Purdue are historic in the world of football after their 100 years of playing the sport, however they have never gone against each other. This will change when the SEC 2nd place Tigers and the Big Ten second place Boilermakers battle against each other. Match is set to start on Monday, January 2nd, hosted at the Camping World Stadium in Orlando, Florida.

Purdue’s defense has definitely improved but LSU has absolutely surprised everyone in their first season with head coach Brian Kelly at the helm.

QB Jayden Daniels is LSU’s key piece, but he missed the second part of the SEC title match due to a tough ankle injury. However he has the time frame to get his injured ankle sorted for the bowl game after being rested and worked on for the last couple of days.

Purdue’s QB Aidan O’Connell is set to start this matchup. The 6 foot 3, 210 pound pocket passer will look to showcase his talent on the field. He completed 32 out of 47 passes for 366 yards in the Big Ten final game, and has 3,490 yards including 22 touchdowns for the season.

Purdue has won their previous 3 regular season bouts to push towards the Big Ten title game, where they ultimately lost to #2 Michigan with a scoreline of 43-22. The Boilermakers currently rank 4th in the Big Ten in total offense and 9th in total defense, also have conceded an average of 23 points in their last 4 games after allowing 28.5 in their first 8 games versus FBS opposition.

LSU was able to peak at #5 in the College Football Playoff rankings before losing the spot versus unranked Texas A&M in the regular-season finale, and then losing to #1 Georgia 50-30 in the SEC championship match.

We lean towards a close LSU win on this one.

Let’s check the latest NCAAF picks, news, stats and NCAAF expert picks for LSU vs Purdue. We’ve plenty of NCAAF predictions for you to consider.

The implied probability for these two teams attached to the betting lines have Purdue at a 18.18% chance of winning the game, meanwhile LSU have 85.71% probability of finishing the game with the W.